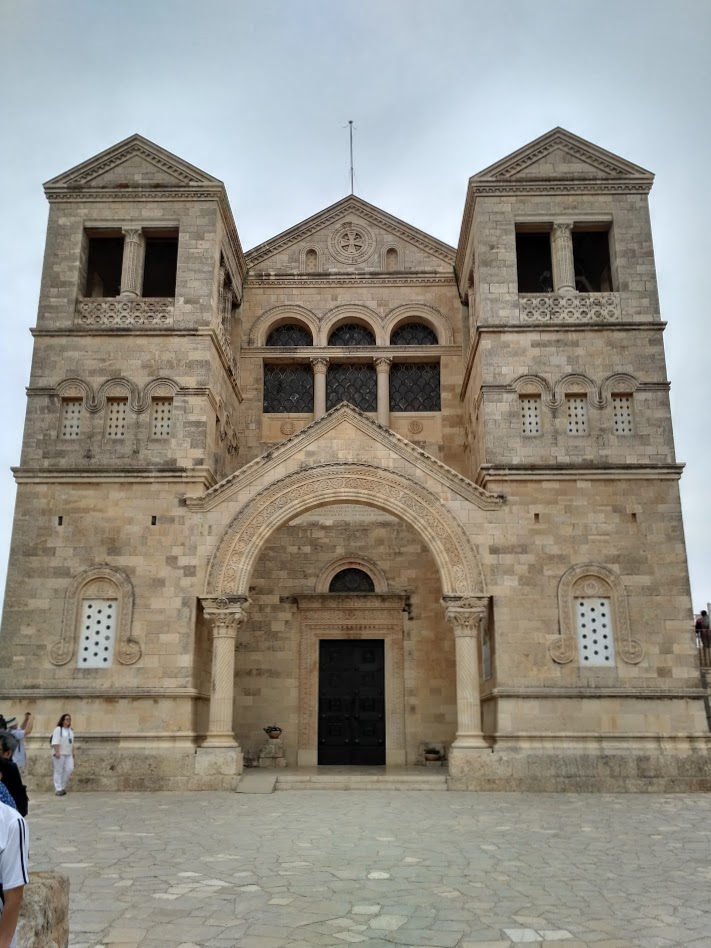 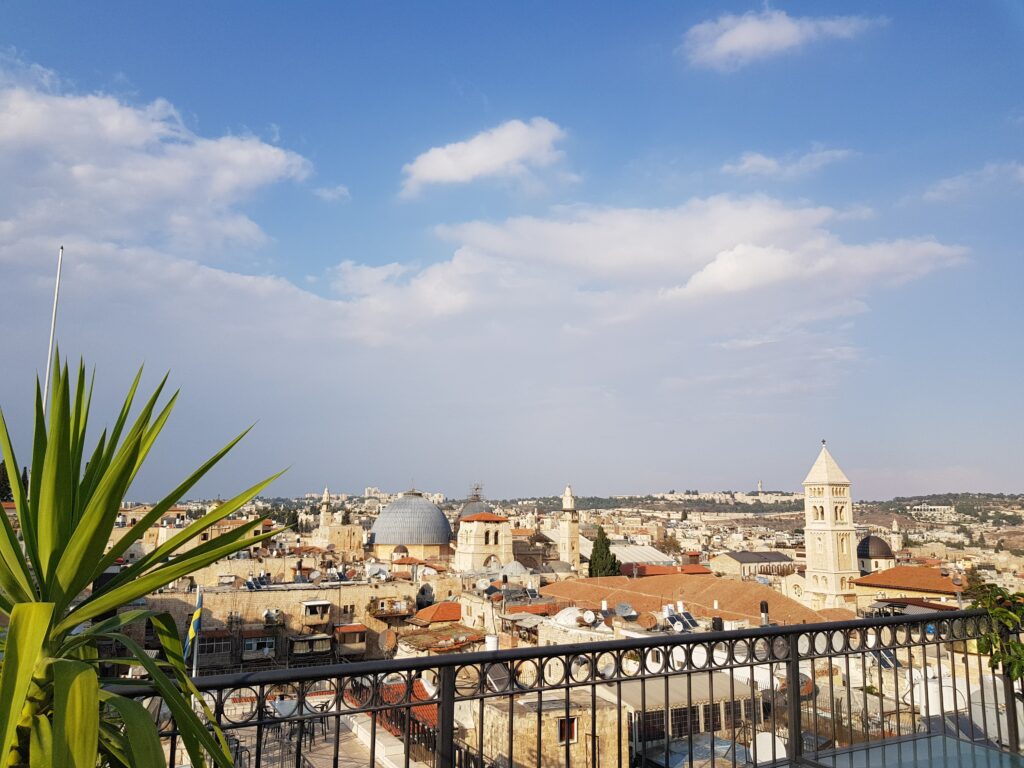 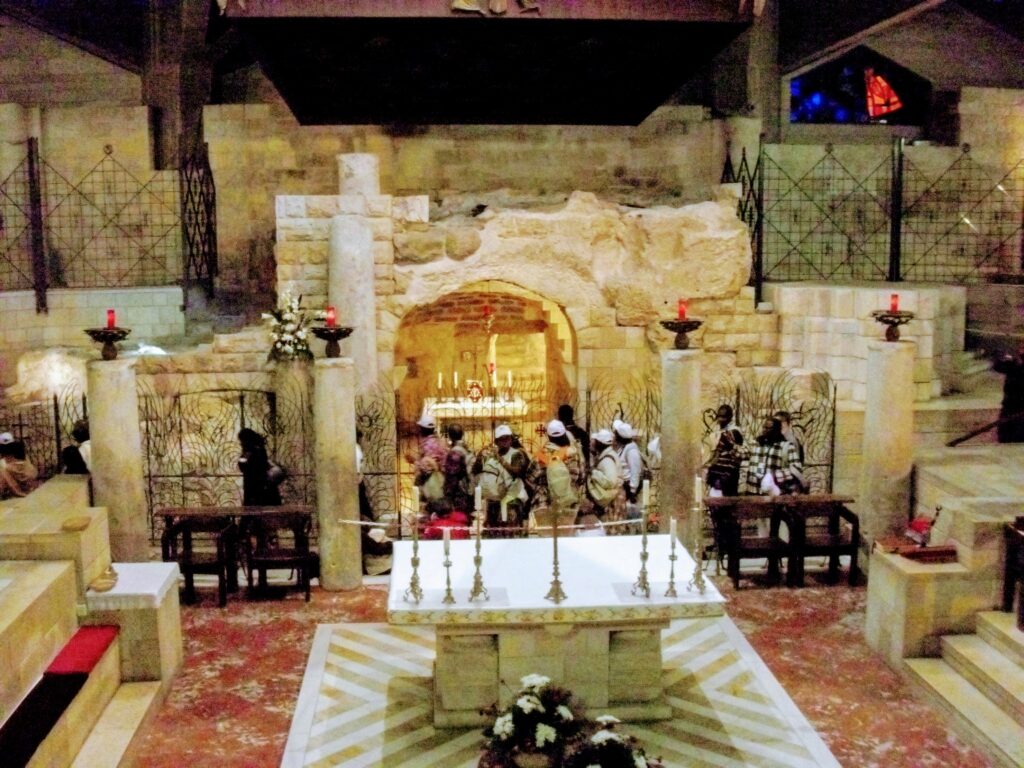 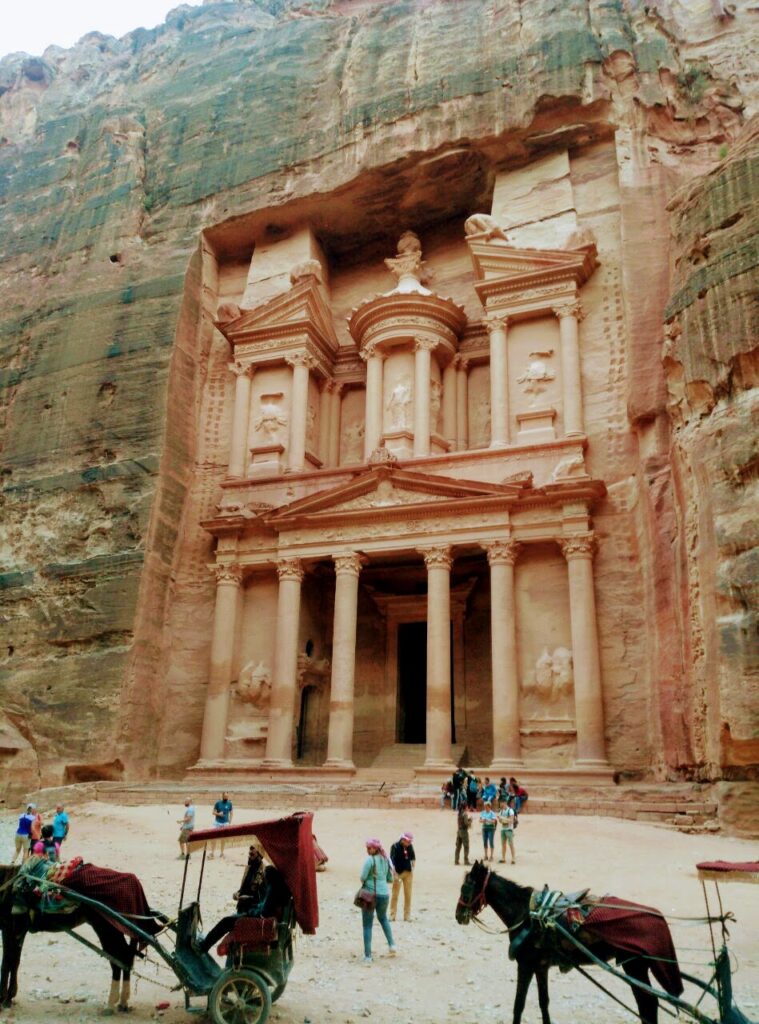 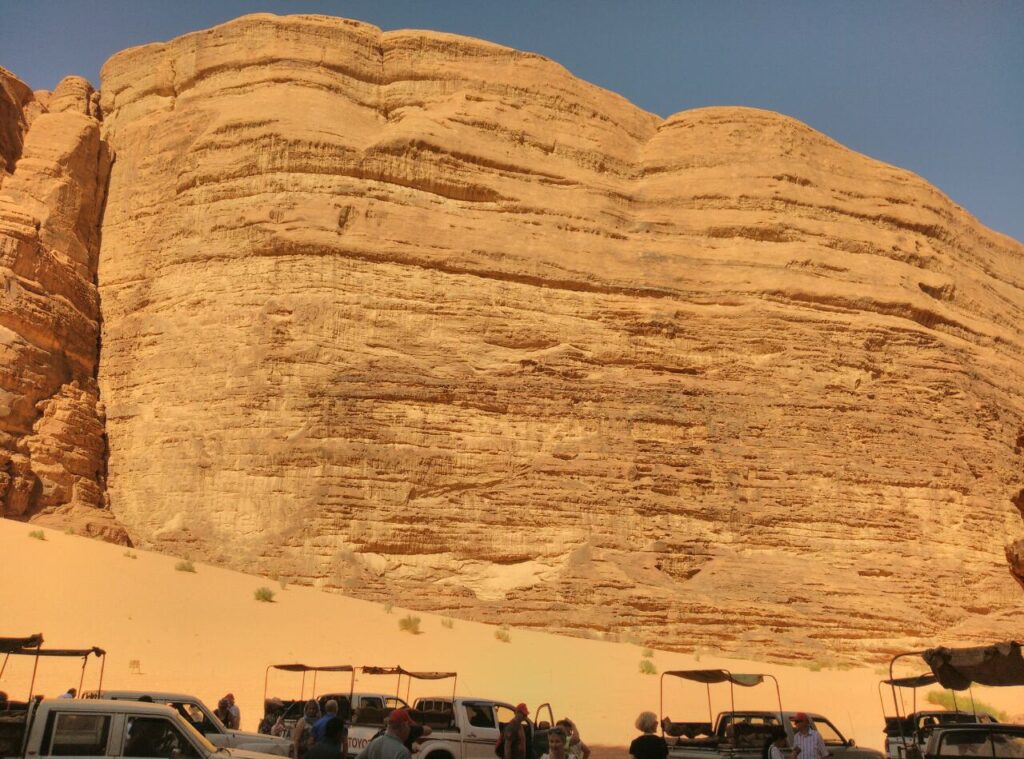 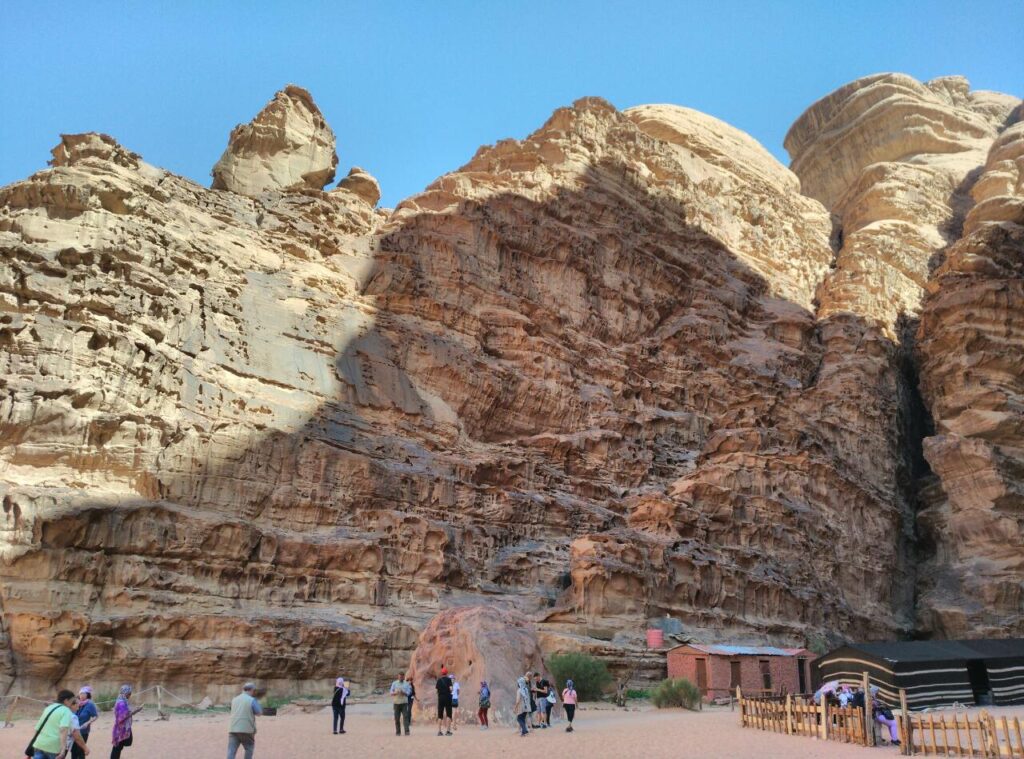 This is the itinerary for those who wants to extend their pilgrimage to Holy Land to Jordan. The program gives opportunity to visit the highlights of the two countries during a one visit.

During this pilgrimage you will be able to see not only the holy places but also the most famous touristic attractions of Jordan – the ancient city of Petra and the desert Moon Valley of Wadi Rum.

Arrive at Ben Gurion Airport (Israel), meet your local guide and driver whom will escort you to your hotel in Galilee – Nazareth or Tiberias. Dinner and overnight.

Day 2
Tiberias and the Sea of Galilee

Our pilgrimage we begin with a boat ride across the Sea of Galilee, from its shores Jesus recruited four of his apostles: the fishermen Simon and his brother Andrew and the brothers John and James (Matthew 4:18-22). Our stop will be on the shore of Capernaum where Peter lived and where Jesus began his public ministry (Matthew 4:13), there he began teaching in its Synagogue, He healed a man who had the spirit of an unclean devil and healed a fever in Simon Peter’s mother-in-law (Luke 4:31-41) followed by a visit to the Mount of the Beatitudes to gain a panoramic vista of the Sea of Galilee and where one of Jesus’ famous teaching episodes Sermon on the Mount was given (Matthew 5-7). Then to Tabgha the fruitful garden where Jesus fed five thousand people with five loaves of bread and two fish (Mark 6:30-46), we shall see the magnificent mosaic commemorating the miracle of the multiplication, we head to the nearby Chapel of St. Peter Primacy. At the lunch time we stop at the local restaurant where we can eat the tilapia fish, known by the name “St. Peter’s fish”, which comes from the story in the Gospel of Matthew about the apostle Peter catching a fish that carried a coin in its mouth.
We come back to the hotel for a dinner and overnight.

This morning we depart off from our hotel, driving into the beautiful landscape of lower Galilee, we stop in Cana of Galilee where Jesus performed his first miracle at the request of his mother (John 2:1-11). In Cana we will visit the Franciscan chapel for a renewal of wedding vows.
Continue to Mount Tabor, the site of the Transfiguration (Matthew 17:1-8), we shall ascend by a smaller motor vehicle due to its narrow route.
Afternoon we proceed to Nazareth, home town of Jesus. There we will visit the Church of Annunciation, Church of St. Joseph, St Mary’s Well, “Mount of Leap of the Lord” this is the traditional site of the brow of the hill which Jesus was led by the angry throng of Nazareth after he preached in the local Synagogue, the hill which they might cast him headlong. But He, passing through the midst of them, went His way. (Luke 4:16-30).
We come back to the hotel for dinner and overnight.

After breakfast we depart the hotel and head towards the border crossing with Jordan, the Sheikh Hussein Bridge (the natural border between the two counties is the Jordan River).
At that moment we leave the bus that we were traveling by and cross the border walking and special shuttle service.
On the Jordanian side there will be another bus and guide waiting for us.
Our trip in Jordan we start in Jerash, an ancient city of Geraza known for its Greco-Roman ruins. A half day visit allows you to see many of the ancient sites, from the famous colonnaded street to the Tetrapylon of Jerash and Hadrian’s Arch. There are numerous Corinthian columns, several theatres, both large and small baths, and an almost complete city wall.
Afternoon we continue to Amman – the capital of Jordan. Settled during the Neolithic era, Amman is now one of the most modern Arab cities. The city tour will bring to us some of the important and most popular tourist attractions in Amman include Qasr al-Abd, the Umayyad Palace and Amman Citadel, and the Roman theatre.
We will finish the day with a dinner and overnight in the hotel.

As we depart today Amman towards the south to Petra, we stop by some interesting sites.
At first, at Mount Nebo that is known as the spot where Moses saw the Holy Land from. From the summit, one can see the Jordan River Valley, the city of Jericho, and – on a very clear day – Jerusalem. In both Christianity and Islam, people believe Moses is buried on Mount Nebo and it is also believed that the prophet Jeremiah hid the Ark of the Covenant on the mountain.
Than we continue to Madaba, the city of mosaics. In the Orthodox Saint George Cathedral, mosaic map of the Holy Land on the floor of the church was discovered. Made from more than a million pieces of coloured glass, the map was designed and assembled in the 6th century. It is considered the most accurate pre-cartographic map of the Holy Land. Since then, other mosaics have been uncovered in other Madaba churches, leading to the name of city.
Afternoon we stop at Kerak to visit the Kerak Castle founded in 12 century. It is the one of the largest crusader fortress in the Levant.
We arrive to Wadi Musa village for a dinner and overnight in the hotel.

Today we start early the day to discover the wonders of Petra, the ancient capital of the Nabataean Arabs. The city founded in the 1st century BC – is without a doubt one of the most famous archaeological sites in the world. In 1985, Petra was listed as a World Heritage Site by UNESCO.
Some of the most famous location within the ancient city are the Siq, which is the ancient main entrance to the city, the Treasury, a 40m tall facade, arguably Petra’s most famous, and the various tombs, most of which date to the first century AD.
Afternoon we drive to Wadi Rum, an UNESCO World Heritage Site. Wadi Rum, also called Valley of the Moon, is known for its narrow canyons and ubiquitous sandstone rocks. It is the largest wadi, or valley, in Jordan. During the desert safari tour the jeeps will take us to the Lawrence Spring (named for Lawrence of Arabia who was living here during the Arab Revolt in 1918) and Little Bridge, where from we could enjoy the spectacular scenery of the valley.
We will go back to Wadi Musa for the dinner and overnight in the hotel.

In the morning we leave the hotel and drive to the North towards the Dead Sea. We stop at the Bethany Beyond the Jordan which is widely considered the baptismal place of John the Baptist. When peace between Jordan and Israel was restored, archaeologists excavated over 20 Christian sites, including baptismal fonts, churches, prayer halls, and a water supply system that dates back to the Roman and Byzantine periods.
After the visit we proceed to the Allenby Bridge crossing to come back to Israel.
We drive to Jericho, the most ancient city in the world. We also stop at the Sycamore Tree which believed that Zacchaeus had climbed up a Sycamore Tree as he wanted to catch a glimpse of this wonderful savior then we stop to view Mt. Temptation where Jesus spent forty days and forty nights fasting and meditating during the temptation of Satan.
We drive to hotel in Jericho for a dinner and overnight.

After breakfast we drive to Qumran, site of the Dead Sea Scroll discovery. After the visit we will have the time to enjoy a swim (or rather a float!) in the mineral-rich waters of the Dead Sea, renowned for its minerals and healing properties. On our way to Jerusalem we stop by Wadi Qelt, site of the Monastery of St George.
We arrive to Jerusalem for dinner and overnight.

As we depart the hotel we will head onto the hill country, to the city Ein Karem, the birthplace of St John the Baptist and visit the Church of Visitation where the Blessed Virgin Mary visited the home of Zachariah and Elizabeth, and proclaimed the ‘Magnificat’ (Luke 1:39-80).
Afternoon we drive to Judaean city of David, Bethlehem. We start by the Shepherd’s Fields where the angels announced the birth of Jesus. Then we visit the Church of the Nativity where we kneel in the Grotto, the birth place of our redeemer.
We return to the hotel for dinner and overnight.

After breakfast we shall start our pilgrimage in Jerusalem from Mount of Olives, from where Jesus ascended to heaven after His resurrection, we shall have an eye on history through a majestic view over Jerusalem, visit the Convent of Pater Noster and Dominus Flevit, we will walk along Hosanna Road to Gethsemane, the Rock of Agony where Jesus prayed His last prayer before His arrest, “My Father, if it is possible, may this cup be taken from me. Yet not as I will, but as you will.” (Matthew 26:36-39). Visit the cave of betrayal (Luke 22:40-46). Drive along Kidron Valley where you will see the Tombs of Absalom, Zachariah and the Prophets Tombs. On the Mt Zion, at the Cenacle we visit the Upper Room of the Last Supper where Jesus spent those last momentous hours with his disciples before His passion. Next we go to Dormition Abbey where we believe the Blessed Mary died. We end the day at St. Peter in Gallicantu where Peter denied Him thrice.
Return to the hotel for dinner and overnight.

In the morning we pass the St. Stephen’s Gate (Lion’s Gate) to enter the Old City of Jerusalem. We visit the St. Anne’s Church, the home of the Virgin Mary and her parents Saints Joachim and Anne. We pass the Ecce Homo where Pilate proclaimed “Behold the man”; Than we retrace the last steps of Jesus. As we walk along the Fourteen Stations of the Via Dolorosa, praying the Stations of the Cross, we reflect on the greatness of His sacrifice as He bore the burden of our sins on the Cross at Golgotha . Finally we arrive at the Church of the Holy Sepulchre for Mass.
Afternoon we pass by the Jewish Quarter of the Old City, we head to the Wailing Wall, the most holy shrine for the Jews. Nearby is the Dome of the Rock on the Temple Mount.
Return to the hotel for dinner and overnight.

On the last day we depart the hotel and will head to Jaffa, the ancient port city located south of Tel Aviv known as the place where the prophet Jonah embarked for Tarshish (Book of Jonah 1:3) and where Peter stayed with Simon the Tanner and the Church of St. Peter where he raised Tabatha from the dead.
This will be our last stop before we drive to the airport for your return flight home.